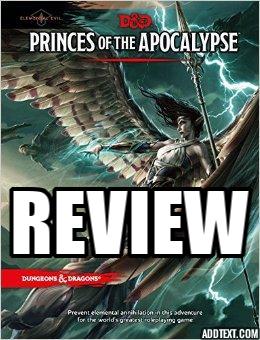 “RECRAP more like it” — 4E-ver — good start, not so great follow through — average damage for monsters is good — fan cuts of the Hobbit movies and the SW prequels — is only low level play good? — the Shackled City adventure path good at higher levels? — game companies need a user experience editor — destroy your PC’s mini upon death, great idea — need better hooks, no “you are caravan guards” business — stop having rituals interrupted at climactic moment — changes for season 2 — there can be only one listener.

“RECRAP more like it”
We ended up not liking it.
4E-ver
Because it seemed like a 4E module once you get into the dungeons. The dungeons tend to be physical spaces for fights to happen in.
good start, not so great follow through
Early levels were fun and had some variety. But once the structure of the adventure becomes apparent, interest wanes.
average damage for monsters is good
I love using it. When you run a lot of fights (as you must here), it really speeds things along.
is only low level play good?
I think so. Higher level play doesn’t seem like real D&D to me, more like a supers game.
game companies need a user experience editor
Absolutely this is true. Someone needs to go through the book, and, at each moment, ask, “Would this be a hassle to do if I were actually running this?” You know all the supplemental material DMs have to make? They shouldn’t have to for big time publications like this.
need better hooks, no “you are caravan guards” business
Seriously. Stop it. Any start to an adventure is better. Lost Mines of Phandelver starts exactly in this way. Hoard of the Dragon Queen is basically the same as well.
stop having rituals interrupted at climactic moment
Lazy.

THIS SESSION WAS THE LAST STRAW.

LISTEN TO WHAT DROVE US TO DESPAIR.

The cult strikes back, and then the party re-strikes back. We have Asa and Alex in the same room this time. Lots of quality banter this time. They really are OP for this content, which leads to some amusing moments. Less karaoke this episode.

Alex joins us — vengeance on the fire cult — we talk about our favorite albums.

Musical shownotes after the break:
We took a detour @ 1:42:12 to talk about our favorite albums ever, no matter how embarrassing. A lot of them were from when we were in high school; so please do excuse us.

We also mentioned Mallory Ortberg from the Toast, the best humor writer today.

This session was not recorded.

We played at a FLGS with an abnormal player configuration.
The plan to kill the Hezrou went off well.
Then some cultists ran to the lower level with our characters in pursuit. They overheard the passwords and recited them to the mezzoloth who guarded the stairs.
They did not go down the stairs. The mezzoloth was cool with them. He was just doing his job. They hung out.
Then they decided to kill the dragon turtle in the lake.
One zombie used as bait. Skeleton archers with water walking shot at the thing when it surfaced but soon were destroyed by its steam breath.
The party retreated and reconsidered.
Where can we buy poison?
3 days north, city called Yartar. It’s mobbed up.
They go, meet Davkas’s contact Side Job (Job as in Job Psalms Proverbs). They give a +1 dagger and 850gp for two barrels of mixed poison. And 50g for 3 fresh corpses to raise.
They tripped on mushrooms. The necromancer saw a roiling black ocean of flesh. When he went to walk on it, hands emerges from it to form a bridge. He crossed. Davkas saw himself back in prison, but it was a very very small prison.
Back in the dungeon, the poison is injected into bladders. The bladders tied to zombies. Remaining poison injected into zombie bodies and sewn up mouths.
The corpses kicked into the lake.
The dragon turtle consumes them and dies within the minute.
It was good poison.
They plunder its hoard and end up with a slim profit and a bunch of XP.

The audio quality on this episode is really bad.

We did a double-hangouts, and something was wrong.
Cast:
If you brave the audio quality, you will encounter the following mildly amusing highlights:
We cleared out most of the level 2 water dungeon and allied with a sea hag.

Scouting Rivergard Keep — I’m Dave; I’ve got a strong arm and a sharp sword — infiltrating the water cult — potty breaks as leet strat — stealth action game — mercenaries are great; they will work for you for money — how to kill a boss without an attack roll — the way below opens.

After our TPK in the last episode, we rolled in with one new toon, one old toon, and only two players—not for the campaign, just for this session.

The Adventures of Dave & Bart begins.

This was a very different style of play than what we’ve done before. It was mostly stealth, infiltration, and in-character roleplaying in order to blend in and bluff, mostly on the part of Jim, via his old debuff/heal bard Davkas. 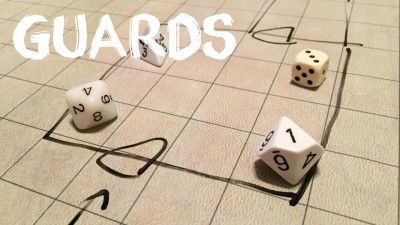 After scouting Rivergard Keep, which is the first tier water cult complex, the party went room to room, blasting mobs like the seasoned pros they are.

If you want to leave a social situation, say because you’re actually trying to infiltrate and dispatch the people you’re with, excusing yourself and saying that you have to take a dump is really a dope strat, as you will see no less than three times in this episode. 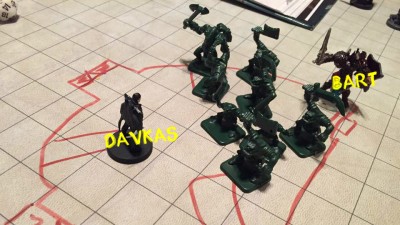 In the process, they convinced some of the mercs that the cult had hired to join up with them, which has proven so far and will prove in later episodes to be an excellent tactic and reliable laugh.
By the end of the episode, the level is clear. Next time, we descend with a fuller party to tackle the water cult proper. 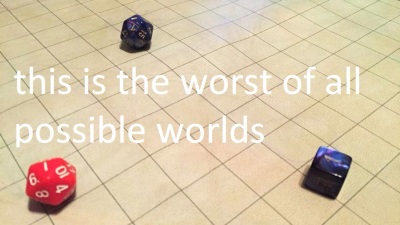 The future direction of the show was in doubt after this one, but, fortunately, we decided to soldier on with Princes of the Apocalpyse, despite our reservations about it. 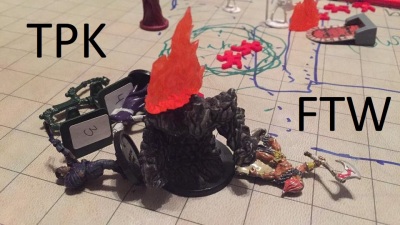 Also: if you have a wizard, get fireball at level 3.

You can rain 16d6 of destruction on you enemies over two rounds. Who can say no to that? 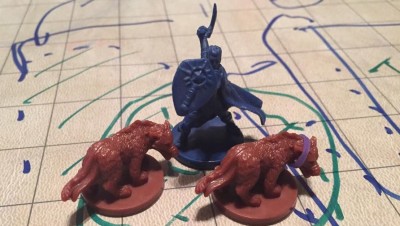 As a direct result of this episode, Tim’s next character took the mage slayer feat. 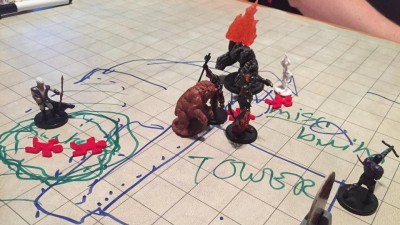 DragonCon 2015 — we are bad at cons — post-hoc dining — LotFP character creation takes 2 seconds — blasted moonscape — always caution.
Pretty short episode here; we were just in to DragonCon, and couldn’t even be bothered to arrange a proper table.

In a break from our usual fare (well, not a huge break, as Lamentations of the Flame Princess is still basically just D&D), we booted up an early +James Raggi LotFP module: Tower of the Stargazer. Jim & Tim created a cleric and a specialist (rogue/thief) with +Ramanan S‘s generator, and we were off.

There’s not any combat in this episode—so, in another sense, its very different from our usual fare. This was all careful problem solving and navigation of imagined physical space. Plus some fun character interaction between “Spec” (awful old man specialist 1) and his Anglican deaconness daughter, Sam (level 1 cleric).

And the caution is well-advised: there were at least a couple times in this episode where it could have been save vs death time. But, because of clever play, the dice never had to come out.

This one is almost entirely combat, very wargamey combat. 40+ orcs disposed against our PCs on a farmstead. You will hear me count a lot.

This is the conclusion of the sidetrek “Iceshield Orcs” from Chapter 6 of Princes of the Apocalypse, in which the party heads to the northeast of the overland map to protect farmsteads from a band of orcs.

I talk about this some in the episode, but I’ll discuss more at length here. The text essentially instructs you to make this part of the module meaningless. The orcs are supposed to toss some javelins, melee for a round, then retreat. You’re supposed to make sure the PCs feel threatened without actually threatening them.

Then dawn arrives, and the elves show up, and the day is epically saved!!!11~~~1

When we set up the defenders, we might not have given the full complement listed in the book, mostly because:

And so we treated the allies as terrain-with-morale. 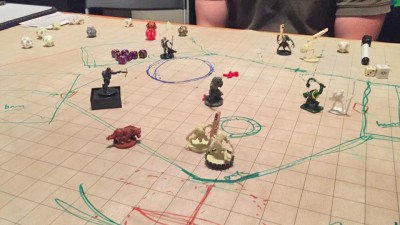 Maybe I’m being too hard on it. If I handed over some NPCs to the players to control (as the module suggests), it would be more of an even fight, such that the orcs might not want to push their advantage . . . 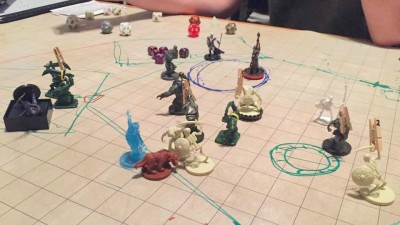 You want to create tension and make it seem like the outcome teeters on the brink of disaster [but this is supposed to be an illusion]. Near the end of the battle [determined by what?], the elves show up as described in the “Relief Arrives” section.

At dawn, the orcs make a final push. It should seem like they might overwhelm the defenders [but I am supposed to make sure this doesn’t happen? how?] in several spots, and get inside the compound. Suddenly, the melodious tone of an elven war horn sounds, and a company of twenty-five elven soldiers . . . arrives to help.

The way this page talks, this section of the game is effectively a cutscene, maybe a QTE you can’t fail, in which case, what’s the point?

I can understand this if you’re just narrating the events, which is fine I suppose(?) if there’s not some illusion of player agency here. It’d be just like narrating an overland journey or presenting the sense of place of a new city, but that’s not what’s going on here.

We ran it as a straight up fight, everything on the table. I (with my admittedly limited) tactical ability played the orcs as hard as I could; and, even though moving so many units through the motions was a bit tedious, it was educational to see more clearly the roots of the hobby—and why you’d want things to die in a single hit most of the time.