This may be of interest to nobody, but here is my process for getting the audio of the game, from start to finish, including links to the necessary programs.
I am certainly a newb at this; so any suggestions are welcome. Nevertheless, I thought it might be useful for someone who’s thinking about getting into the podcast game to see what the entire flow can look like.

2/3 of the party is composed of new characters, fresh, shiny, and chrome. But eternal??? They infiltrate the Sacred Stone monastery, home to the earth cult, and engage in hijinx involving excretory functions on command, stacking bodies in the washroom, and abusing prestidigitation to clean up after themselves.

Shadow was tanking hard this session. As a DM, I felt like I had no chance. I downed him once and was shocked—but of course he was back up before the round was over.

Moose’s new fighter-archer build with Geth Stormwind is serious business, especially combined with the optional flanking/facing rules we’re using from the DMG. If he stays behind targets at range, he has advantage all day and can use his battlemaster options to really lay the hurt on.

And I really wish I would have known how to use the black earth priest before running him in this session and getting straight pwned. Here’s my post on the proper tactics to use with these guys: http://detectmagic.blogspot.com/2015/05/princes-of-apocalypse-tactics-black.html.

Sometimes you eat the bear; sometimes the bear eats you. Or the giant vulture does. Or you get crushed by a tidal wave.

The party takes a (really long) journey to Womford and encounters many, many cultists.

Daniel shows that he doesn’t read spells before casting them.

Moose hath made a death cleric.

Part 1, Or How I Learned to Stop Worrying and Love the Axe

When Moose decided to upgrade from guest star to featured act, he wanted to upgrade his randomly generated dragonborn fighter to a more appropriate DPS option. A progression from a human glaive battle master fighter making use of Polearm Mastery feat’s glaive-to-hilt combat and Great Weapon Mastery feat’s power attack ability, with added accuracy from Precision maneuver, was suggested as an optimal damage output solution.

Here the rationale for rejecting that solution is shown.

First, the Human Glaive Battle Master (HGBM) will be examined by level up to the suggested maximum in Princes of Apocalypse, CL15.

The strength of the build relies on the hilt attack functioning as another attack on which to apply the power attack. By level 11, three beefy attacks with the pointy glaive end and a bonus attack with the hilt are possible, each adding 15 to the base weapon damage including the strength modifier. Accuracy can be improved with precision up to five times per short rest, and additional flexibility is given by other maneuvers. Finally, using action surge, burst damage can be made with seven attacks in one round.

Note that the base build can be transitioned into multiclass of choice as the last 2 feats and bonus superiority dice can be traded for a dip into another class or two without harming the maximum damage efforts. A discussion of this is beyond the scope of the article, but suggestions can be posted in the comments.

Compared to many other builds, HGBM appears consistently more destructive over long adventuring days and resilient with high Armor Class, second wind, evasive maneuvers, and reach weapon. However, several more potent and resilient builds were found in exploring options for our
“Tiamat Takedown” several months ago. Some are pure fighter, others with splashes of lesser classes. What became Jeff, Ender of Dragons began as the mono-class fighter specialization covered next.

Half-Orc Great Axe Champion (HOGAC) is put together as follows.

Yet the choice of great axe is made for precisely two reasons: the rules-as-written wordings of Savage Attacks and Great Weapon Fighting. Each allows you to roll (or reroll) one of the weapon’s damage dice and add it to damage. Yes, only one. And great weapon fighting has two damage die. The math works out in favor of great axe because of these quirks.

Like the HGBM, the HOGAC’s damage output relies on the bonus attack, here generated from Great Weapon Mastery by either critical hits or dropping enemies to 0 hp. It can be shown that as the number of attacks increases per turn and as the critical hit chance improves, bonus attacks generated approach 70% uptime from critical hits alone on any given turn with advantage. Additionally, another 1d12 is dealt to each critical hit from Orc racial perk.

Before jumping into damage numbers, the other advantages will be enumerated:

To sum, significant non-damage bonuses to resilience and simplicity are given by HOGAC when compared with HGBM.

First, a comparison by damage milestone for HOGAC and HGBM will be discussed, as shown below in figure, by damage per turn (DPT) on average of an infinitely long fight. All sources of damage are accounted for in equation and assume advantage approaching 100%. Armor class 16 is used, approximating average of all creatures in Monster Manual per Surf Archer. The precise calculation methodology will be elucidated in a series of separate posts.

It is observed that HOGAC outpaces HGBM at every milestone except the first. As the proportion of time that the HOGAC bonus attack is active increases, so does the gap in damage per turn between the builds. This gap is expanded when action surge is used for burst damage.

Second, by cursory inspection it is also clear that the upper limit of damage achieved with HOGAC is greater than HGBM. In fact, 112 damage is calculated as the difference, with 45.7% more damage potential demonstrated by HOGAC.

Last, curiosity may have grown regarding how AC affects damage output comparisons. The answer can be found below in figure. The similar arcs formed demonstrate the similarity of the damage die used by both weapons, but a damage source independent of AC separates them. This constant can be shown to be the damage due to critical strikes. It should also be noted that the HOGAC GWM bonus attack active time is 63% of turns, but only triggers from critical strikes were considered and activations of ability due to killing enemies would increase percentage.

It has been demonstrated that in a sufficiently long combat scenario HOGAC surpasses damage output from HGBM. Many additional perks to survivability and simplicity were also outlined. Further discussion regarding the length of combat and role of HGBM superiority die, as well the effect of multi-classing on these calculations will be made in Part 2, after the ridiculous build that made the amazing average damage arc shown below is discussed.

This is a brief episode in which the party handles a single (and the last) low-level sidequest: The Haunted Tomb. Audio quality is the best so far and representative of the trend for later episodes. We’re getting the hang of this.

Apologies: NONE. We’ve taken our audio quality to another level. Hope you enjoy.

The party meets the fancy Feathergale Society, rides hippogriffs to hunt a manticore, choreographs an action movie, finds a high level area, and has a deadly encounter with jackalweres. Someone dies. But who!?!?!?

Corrections: the adventure does in passing mention the history of Feathergale Spire and the other haunted keeps (page 5 and 33, column 2).

Rules discussions of interest: how warlock spell slots interact with spells and slots from other classes on a multiclass character.

Apologies: sorry about the chair squeaking. We’ve since learned to use wooden chairs.

The DM has been busy. Writeups to come.

Marking in the book is definitely best practice.
The Princes of the Apocalypse appendices have this sweet concept art that wasn’t implemented.
I’m trying to fix that.

May this campaign add many more. 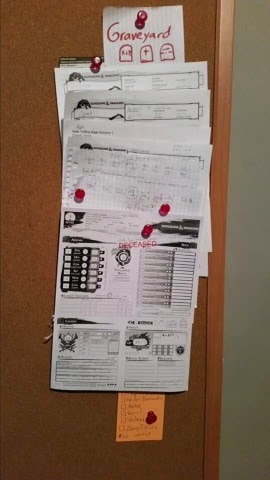